Today, the Surfrider Foundation, on behalf of its Coos Bay Chapter, has filed a lawsuit seeking to restore decades-long public access to Lighthouse Beach in Coos Bay, Oregon. Specifically, the lawsuit seeks to reopen and have a court judicially affirm the public’s right to use a specific footpath, located near the southwest end of Lighthouse Way, that leads to Lighthouse Beach. Lighthouse Beach is a beautiful and culturally significant pocket beach that has been used extensively by members of the community for beach recreation, including surfing, fishing, walking, family gatherings, picnics, and more, as well as stewardship. In March 2021, the public’s long-standing use was cut off when barbed wire was strung across the trail and a gate was installed, making the path hard to access. Thereafter, the steps built by members of the public decades ago were removed, and brush was thrown in the path, making it impassable.

Prior to this, Surfrider members and members of the public had used the footpath for generations to access the beach. Surfrider’s Coos Bay Chapter members have used the path not only to enjoy Lighthouse Beach for its recreational opportunities, but for stewardship activities including over 20 years of water quality monitoring for Surfrider’s Blue Water Task Force program, as well as beach cleanups, including an extensive months-long cleanup in 2014 after a large dock and millions of pieces of foam from it washed up on Lighthouse Beach.

After dismay and community outcry over the restricted access, Surfrider sprang into action, creating a Campaign to restore public access, and investigating the public’s historic use. Surfrider also reached out on multiple occasions to the owner of the property upon which the path sits, in an attempt to reach an amicable solution without resorting to litigation. However, the property owner was unwilling to discuss any meaningful restoration of public access and instead tore out the steps at the bottom of the path where it descends to the beach.

The Oregon legislature has recognized that it is in the public interest to do whatever is necessary to preserve and protect the scenic and recreational use of Oregon’s ocean shore. In that regard, Surfrider’s lawsuit requests that the Court declare that the public’s longstanding, generational use of the footpath has given rise to public prescriptive rights and that access must be restored.

“Beach access is a cornerstone of the cultural values we hold as Oregonians,” says Coos Bay Chapter member and leader of the Chapter’s Ocean Friendly Gardens and Ocean Friendly Restaurants programs Carmen Matthews.  “Surfrider's lawsuit is not just for access today, but for the future generations to continue the recreational and stewardship activities at Lighthouse Beach, one of our most prized coastal treasures.”

Members of the community can provide critical support to Surfrider’s efforts by contributing to Surfrider’s legal fees. Please visit the Chapter’s website to donate here.  You can provide further support by joining the Coos Bay Chapter as a member, and filling out Surfrider’s public use survey, if you haven’t done so already. 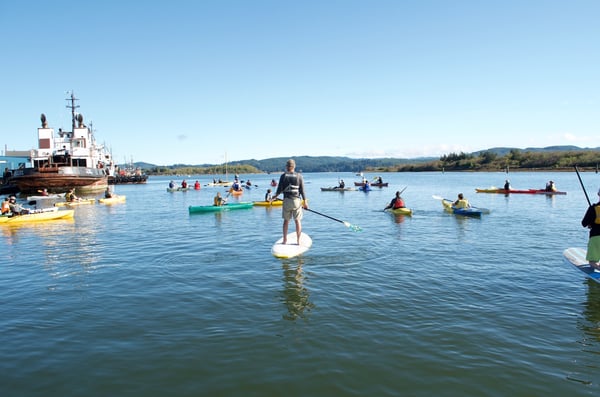